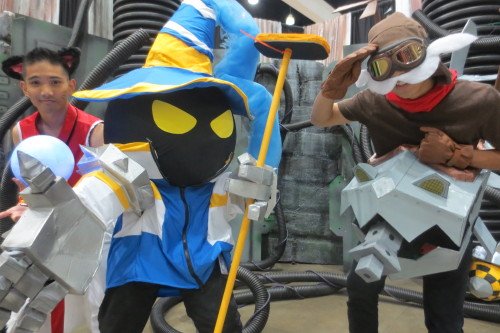 A few years ago, I found out about a Youtuber who was organizing a local League of Legends cosplayer meetup complete with pizza. Intrigued, I rounded up my Curling Veigar cosplay and brought along two friends.

The meetup was located at Youtube Space. The venue itself was quite nice.

It was dark out by the time we arrived but the facility was still aglow. Youtube Space felt like a combination of the very location and usage it was intended for—a little Hollywood, a little Internet, and a whole lot of video with dozens of screens around. After getting checked in, we walked to the studio where the meetup was to happen.

Of course we were one of the first to arrive. There were two or three other cosplayers chatting with one another. We joined in the conversation talking about League of Legends and cosplay construction.

This was the most mundane part of the night, as it would turn out.

Within 15 minutes, the room was packed.

“Where did these people come from, all of a sudden?” I wondered.

Next thing I know the organizer arrives and begins setting up cameras to record footage of the meetup. Little do my friends and I know that the meetup is coded to mean a Youtube music video shoot. The organizer is a Youtuber who had rented the space, which resembled a bar scene, to record a music video.

The details are a bit blurry after this, but I do remember dancing and feeling super awkward—especially since Curling Veigar can mostly just bob and waddle around. There was an Akali serving up (fake) drinks and the song being played was LMFAO’s “Shots.”

I don’t quite remember either how the event ended—I suspect either the music video recording had finished and we dashed out to grab dinner, or we somehow were able to sneak out with me as a big hulking Veigar.

I suspect it was the former.

To this day, I laugh at how strange that event was and feel super bad that I dragged one of my best friends to this strange meetup. I don’t eve know who the Youtuber was or what was produced, in retrospect. I only wish good things come to everyone involved in the production of that video, especially since pizza was nowhere to be found.

Lesson learned: if you see an invite for a cosplay meetup, it may involve dancing for a music video—especially if the location is at Youtube Space Los Angeles. Oh and you probably won’t be served pizza.

What is an interesting non-convention cosplay story that you have to share?